Screen Captures from the 2008 War Drama, based on a true story on a failed attempt to assassinate Hitler. Tom plays Colonel Claus von Stauffenberg. Here are the caps: 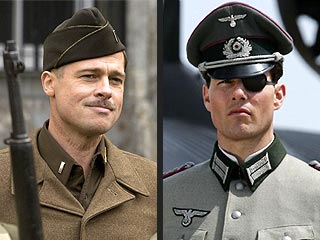 The uncharacteristically harsh remark was originally published in a wide-circulation weekly German magazine, and, as could be expected, was reprinted internationally. Problem was, it was never uttered.

As for the two movies, both of which feature attempts on the life of German dictator Adolf Hitler, Cruise’s Valkyrie, after a troubled production history, was released late last year, to indifferent reviews and box office.

Director Quentin Tarantino, after premiering Inglorious Basterds to wildly mixed reviews at this May’s Cannes Film Festival, went back into the cutting room with it and opened the movie to the American public on Friday. While reviews still ran the gamut from four stars to fewer, most critics still singled out Pitt’s no-nonsense anti-Nazi Tennessean.

I have added 60 pictures to the gallery of Tom at the “Valkyrie” Mexico City Premiere that took place on 5th February.

I think we now have all the latest events/premiere pictures. But if I have missed any, please do let me know!

DISCUSS them at the forum!

Many saw evil. They dared to stop it.

“VALKYRIE is a meticulous thriller… The two best supporting performances are by Kenneth Branagh, and Tom Wilkinson, as a general who artfully plays both sides of the fence.”
â€”Roger Ebert, Chicago Sun-Times

Los Angeles, CA â€” The remarkable yet seldom told true story of the German Resistance’s attempted coup and assassination of Adolf Hitler reveals itself when VALKYRIE is released on Blu-ray Disc and Special Edition DVD with Digital Copy on May 19th from MGM Home Entertainment. Set in Nazi Germany, VALKYRIE chronicles the daring and ingenious “July 20 plot” to eliminate one of the most evil tyrants the world has ever known. Oscar-nominee Tom Cruise (Mission Impossible, Minority Report) stars as the loyal German nationalist Colonel Claus von Stauffenberg, the mastermind behind the plot to kill Hitler and overthrow his fascist regime.

END_OF_DOCUMENT_TOKEN_TO_BE_REPLACED

Cruise stars in the lead as Colonel Claus von Stauffenberg in â€œValkyrieâ€ that is a historical thriller depicting the July 20, 1944, plot by German army officers to assassinate Adolf Hitler.

â€œUntil now, I was working only with actors and not stars but with this movie (â€™Valkyrieâ€™), I got to work with a mega star like Tom Cruise. He is down to earth, gets into the story and doesnâ€™t let you feel uncomfortable at all because of his status or anything. I loved working with him,â€ Singer told IANS over phone from Seoul, South Korea.

The film has also been in the news across the world for multiple controversies apart from speculations for Cruiseâ€™s performance as the Nazi officer.

The director and the actors are on a promotional tour for the assassination thriller across Asia, Europe and America. It is releasing in India Feb 20.

A news conference to promote his movie “Valkyrie” turned into something of a fan club meeting when a journalist said he promised his niece he would get a photo with Cruise. The actor immediately obliged.

That prompted another journalist to squeeze under a barrier for a photo. Guards stopped other reporters from doing the same.

He thanked one questioner with the Spanish “gracias” â€” though Brazilians speak Portuguese. And he said he enjoys the tango â€” the traditional dance of neighboring Argentina.

“Valkyrie,” starring Tom Cruise as a rebellious Nazi officer, emerged at No. 1 on the international circuit for a second consecutive weekend, grossing an estimated $18.6 million from 3,900 screens in 26 markets and raising its overseas cumulative total to $38.9 million.

The MGM/UA production, handled overseas by 20th Century Fox and other local distributors, opened in 15 markets, finishing on top in at least five, including France and Spain.

In Germany, where “Valkyrie” was filmed, its second weekend produced $2.3 million from 400 locations, lifting its market total to $7.3 million, the largest for any overseas territory the film has played.

END_OF_DOCUMENT_TOKEN_TO_BE_REPLACED

Cruise back on a winning patch

PROVING once and for all that we should never underestimate the popular appeal of Tom Cruise in an eyepatch, his anti-Hitler thriller Valkyrie led the box office charge over the long weekend.

The film took $2.33 million, which was just barely enough to knock off Bride Wars, which managed a healthy $2.25 million in its second week, bringing its two-week total to a hefty $7.1 million.

All other debuts did very well. Another old-timer also proved he has not lost his edge, with Clint Eastwood’s Gran Torino opening at No. 3 with $2.24 million, followed closely by the vampire/werewolf epic Underworld III, which netted $1.9 million. Revolutionary Road had to settle for No. 9 with $1.02 million. Not bad, though the chemistry Leonardo DiCaprio and Kate Winslet had in Titanic isn’t quite popping the second time around.

After a meteoric rise fuelled by powerfully positive word of mouth, the arthouse favourite and Oscar hopeful Slumdog Millionaire finally seems to be levelling out. At No. 5, the film, which took $1.5 million across its sixth weekend, added another eight screens but saw its audience grow by exactly 1 per cent.