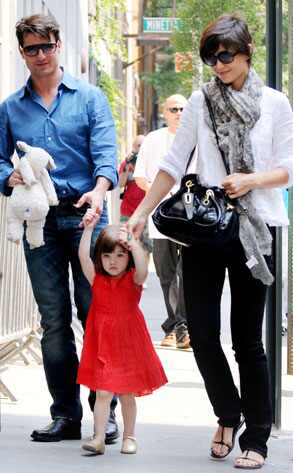 What does Suri Cruise want from Santa Claus?

“You know, she likes to color,” her dad, Tom Cruise, tells me in an exclusive interview. “She likes dolls, stuffed animals. She’s really easy about stuff like that.”

Sounds like shopping for daughter Bella, 16, and son Connor, 13, wonâ€™t be too hard either.

“A cool pair of sneakers, different books that they like,” Cruise says of their wish list. “They’re kind of like, ‘Look, it’s been a busy year and we’re just looking forward to some quiet time, just hangin’ out.’ ”

Of course, he and Katie Holmes have been anything but quiet recently…

Sheâ€™s finishing up her run in Broadwayâ€™s All My Sons, while Cruise is crisscrossing the country promoting his Christmas release, Valkyrie.

In the real-life World War II thriller directed by Bryan Singer, Cruise stars as Claus von Stauffenberg, a German army colonel who led a plot to try to assassinate Adolf Hitler and remove the Nazi Party from power.

Historical spoiler alert: When Stauffenbergâ€™s attempt failed (a bomb set off in one of Hitlerâ€™s war briefing meetings left the dictator with just minor injuries), Stauffenberg and his coconspirators were arrested and quickly put to death by firing squad.

“Bryan sent [the script] to me and when I read it, it struck me as this great page-turner,” says Cruise, who nabbed a Golden Globe nomination yesterday for his role as studio boss Les Grossman in Tropic Thunder. “And when I heard the full scope of the story, I thought, Man, you know, it’s just a natural suspense thriller.”

He continues, “I grew up looking at the Holocaust and always thought, ‘Why didn’t they just shoot him?’ What I find inspiring is that there were people who stood up against this and wanted to stop him…They really went to that extent and risked everything to stop it.”

Next up on Cruise’s plate could be something completely different: a musical. “I’d like to do it as a film,” he says of his plans for some big-screen song and dance. “Kate loves musicals. Suri loves them. And I’ll never forget going to The Sound of Music when I was a kid. My mother was working and it was us four kids. It was a big thing in our family…It was a big afternoon for us.”

And thereâ€™s something else heâ€™s never doneâ€”an animated flick. “We all love those Pixar and DreamWorks [movies],” he says. “But I haven’t found one that I said, ‘Yeah, I’m gonna do it.’ But yeah, I would do it.”

In a couple of weeks, however, he and Holmes have the holidays to think about. Theyâ€™re not sure where theyâ€™ll be spending them, but the place theyâ€™ve called home for the past few months is looking like a definite possibility. Since relocating to New York for Holmesâ€™ Broadway gig, theyâ€™ve actually been living in the first apartment that Cruise ever bought after he made Risky Business.

If you want to see Marc Malkin tell you about his interview with Tom, watch his small video here: