Tom Cruise has been sued in a Los Angeles Superior Court.

The lawsuit appears to be part of a legal duel between the parties.

Sapir edits Bold, a periodical that in 2001 published a $500,000 reward for any video evidence that Cruise is gay.

Sapir claims that the magazine received a video and issued a press release to that end.

Cruise has consistently denied being gay. The actorâ€™s attorney, Fields, filed a lawsuit against Sapir’s magazine for defamation, seeking $100 million in damages.

Sapir alleges that during the defamation litigation, Cruise hired Pellicano to wiretap his phone.

The magazine editor is asking for $5 million. [SOURCE]

With work threatening to take Tom Cruise and Katie Holmes to separate places on the globe this week, the couple made sure to celebrate their third wedding anniversary in advance.

On Saturday night, the pair â€“ who tied the knot in a lavish affair in Italy on Nov. 18, 2006 â€“ celebrated the milestone with a romantic Italian dinner at Boston’s Bricco restaurant. Cruise, 47, surprised Holmes, 30, by renting out the entire second floor of the eatery, where the pair dined on house-made pasta, Chilean sea bass (Holmes’s pick) and Wagyu steak (Cruise’s choice).

With 3-year-old daughter Suri at home, “they held hands the entire night,” Ron Leduc, director of operations for Bricco, tells PEOPLE. “They had a romantic dinner.”

The pair were ready for more romance the next night, when they stopped in Boston’s Abe & Louie’s restaurant, a favorite of the couple during their autumn stay as Cruise shoots the upcoming action-comedy Knight & Day.

Surrounded by their security team, Cruise and Holmes sat at a table in the front of the restaurant and finished their meal with two sweet treats: seven-layer chocolate cake and key-lime pie.

As for their actual anniversary, Cruise was scheduled to fly to Austria to continue shooting Knight & Day with Cameron Diaz. Holmes also has been busy with work: She is shooting the indie film The Romantics on Long Island, N.Y., where she filmed a wedding scene as the best friend of the bride (played by Anna Paquin).

“She really seems to be in great spirits today,” says a set source, noting that Holmes’s parents were with her on location. “She is in a great mood but I think you can tell she misses him.”Â  [source]

Tom Cruise pays his wife Katie Holmes a visit on the set of her new movie, The Romantics, in Long Island, New York on Tuesday afternoon (November 10).

The couple took a romantic walk together, strolling hand-in-hand during a film break.

The Romantics is a romantic comedy centering around eight college pals who reunite for the wedding of Anna Paquinâ€™s character. Katie plays the maid of honor who was romantically involved with the groom (Josh Duhamel). 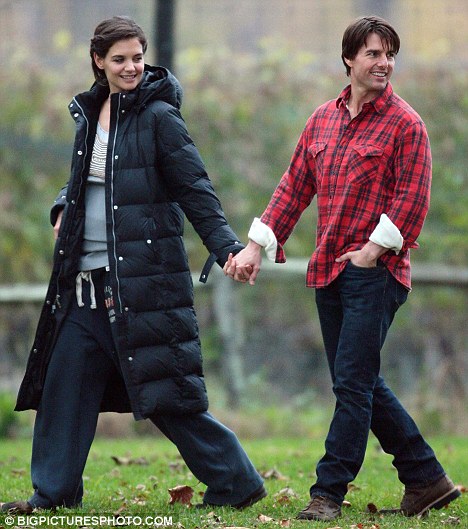 American actor Tom Cruise and his wife Katie Holmes have helped actor John Travolta come back to public life with a top secret Church of Scientology party in England at the weekend.

Travolta, 55, who had stayed away from the limelight after the death of his son in January this year, was made guest of honour along with his wife Kelly Preston at the 25th anniversary of the International Association of Scientologists bash, reports Contactmusic.

According to UsMagazine.com, Cruise, 47, was among those selected to speak at the event held at Saint Hill Manor in East Grinsted, West Sussex on October 16.

The party was a welcome break for the Travoltas, who have been embroiled in an extortion trial in the Bahamas against a paramedic and a former senator, who allegedly tried to bribe the Hollywood couple over documents the movie star signed immediately following a seizure, which claimed his teenage son’s life.

Tom Cruise isnâ€™t an attorney, but heâ€™s played one on the big screen and the other day the Hollywood heavy was in Cambridge auditing a class at Harvard Law School!

According to Harvard Law Record blogger Jessica Corsi, Cruise popped into celebrity attorney Bertram Fieldsâ€™ guest lecture in professor Bruce Hayâ€™s entertainment-law class. After announcing he had never heard his buddy lecture before, Cruise took a seat in the back of the class at Langdell South and even participated in the two-hour discussion.

Apparently, Fields, who is a 1952 Crimson alum, and Cruise are quite tight in Tinseltown. Hence, Tomâ€™s appearance.

â€œThroughout his discussion, Fields would refer questions back to Tom, and Cruise would also interject his own experiences,â€ Corsi blogged. â€œHe spoke about tabloid magazines . . . working with director Stanley Kubrick and the business of how the ratings on movies get set in the U.S. as opposed to Europe.â€

The students, were, of course, blown away.

The leading man also talked about the paparazzi, his children and how he deals with the omnipresent cameramen.

â€œ(H)is daughter, Suri, has, according to Cruise, some comical responses,â€ reported the Record writer. â€œFor example, she will sometimes throw down her hands and say, â€˜Why is this person following me?â€™ She has responded to encroachments on her privacy by raising a hand and declaring, â€˜Personal space!â€™ â€

The students, although star-struck by Cruise, acted cool by continuing their usual classroom activities of taking notes, GChatting and surfing retail Web sites, said Jessica. But by the end of the class, â€œa bush fire of text messages, emails and IMsâ€ swept through campus and the room was crowded with kids who hadnâ€™t signed up for Hayâ€™s course. How odd.

Corsi wrote that Cruise stayed an hour after class to answer student questions – which is way more time than their own professors are able to give!

Hollywoodâ€™s Mr. Personable doled out advice, stories, high-fives, handshakes, hugs, and – even at one point – an impromptu dance. [Source]

Actor Tom Cruise has said that having sex with him is like flying.

The â€˜Top Gunâ€™ star along with actress Cameron Diaz appeared for an interview with Jay Leno on TV, in which he answered questions on his sex life, reports The Daily Telegraph.

The host asked: â€œTom, I know youâ€™re a pilotâ€¦what are you better at. Flying or sex.â€

He replied: â€œI try to excel in all areas, and Iâ€™ve never been asked for a refund.â€

And then he completed Diazâ€™s statement by saying that having sex with Tom is â€œlike flying, Jay.â€

During the show Cruise assured that he has never visited a strip club.

Leno enquired: â€œHave you ever been to a strip club?â€

Cruise said: â€œActually, I never have. Sorry to disappoint you.â€

â€˜My Sisterâ€™s Keeperâ€™ actress interjected saying, â€œItâ€™s kind of hard to be Tom Cruise and go to a strip club you guys, seriously.â€

Hollywood hunk Tom Cruise gave Hub fans an unexpected treat yesterday by turning up in the South End to film scenes for his latest flick at Gaslight restaurant alongside A-list hottie Cameron Diaz .

The pair star in a new action comedy, tentatively titled â€œWichita.â€ The film features Cruise as a secret agent popping in and out of the life of single mom Diaz.

Outside Gaslight, the Academy Award-nominated heartthrob told the Inside Track that filming local scenes, including at Worcester Regional Airport, has â€œbeen a blast.â€

â€œItâ€™s been a great first week,â€ Cruise said before departing in a black Escalade. On Friday night, Katie Holmes, Daddy Cruise and little Suri had dinner at Abe & Louieâ€™s on Boylston Street.

Some fans, such as Cara Tirrell of Ashland, grilled Cruise for pledging allegiance to the New York Yankees . Tom played it up, telling the crowd he has a lot of friends who are Red Sox fans and wants to see the Sox in the playoffs.

â€œWe didnâ€™t even know he was there,â€ said Tirrell, a 37-year-old mental health clinician. â€œWe just stumbled onto the scene.â€

Cruise and Diaz also will film a post-plane-crash scene in Bridgewater. However, a chunk of an old Boeing 727 slated for the set was nearly derailed Friday after being stuck on a flatbed truck in Longmeadow for about 18 hours.

The fuselage was being sent from North Carolina to Bridgewater for inclusion in an explosion scene on a 263-acre corn field.

Longmeadow police Lt. Gary Fontaine said the truck carrying the fuselage remained parked at a rest area on Route 5, where â€œit wasnâ€™t blocking traffic,â€ before being escorted by state police to Bridgewater between 1:30 p.m. and 2 p.m. Friday afternoon.

The truck driver told WWLP Ch. 22 News that the trip, which should take two days, has taken nearly two weeks. The network reported the delay was because the driver was awaiting state permits.

Tom Cruise and Katie Holmes have wished their pal Jay Leno sweet success with his new primetime television show, which kicks off tonight.

Tom and Katie purchased the cupcakes and a coconut cake from Sprinkles, a celeb-friendly cupcake shop in Beverly Hills.

The cupcakes are the second time Tom has shown his early support of his buddy Jay.

The talk show host revealed that Tom previously showed his enthusiasm for â€œThe Jay Leno Showâ€™sâ€ racetrack, a new segment for the program which sees celebs compete for the fastest time.

â€œIâ€™ve told it to a number of stars and, as a matter of fact, even Tom Cruise called and said â€˜Can I get in early and practice?â€™ I said â€˜No, nobody gets to practice,â€™â€ Jay recounted in August to a Television Critics Associate panel in Pasadena. â€œThe fun thing about it, thereâ€™s a lot of people, [which] people want to see, perhaps athletes and people like this who are not good talkers but would be fun in this sort of environment â€“ to see if Shaquille Oâ€™Neal is faster than Cameron Diaz.â€

And in fact, Cameron Diaz is coming to Lenoâ€™s show. She and Tom will appear on his program together on Tuesday evening.

Tom Cruise has never forgotten when he made the racing movie, “Days of Thunder.”

Cruise will narrate an upcoming documentary about a NASCAR racer. The film is called “Together: The Hendrick Motorsports Story.” It will air October 11 on ABC before the
network begins its coverage of the Sprint Cup Series race at California.

Cruise became friendly with Hendrick when he did some consulting for “Days of Thunder.” Cruise and his family have been Hendrick’s guest at races the past several years.