They join Chris Hemsworth, Josh Peck and Adrianne Palicki in the revamp of the 1984 action movie about a group of teenagers who form an insurgency when their town is invaded — this time by Chinese and Russian soldiers.

END_OF_DOCUMENT_TOKEN_TO_BE_REPLACED

KATE Ceberano has caught up with Tom Cruise and Katie Holmes a number of times while the couple have been in Melbourne, including performing at a 47th birthday dinner for Cruise in the city last month.

Cruise and Ceberano have known each other for years through their belief in Scientology.

Ceberano wanted to set the record straight during the week about her friendship with the star couple.

“It may have been printed that Tom is not my best friend. Please let me amend that by saying he is a great friend and one who’s friendship I value over anyone else I know,” she said.

“Quite simply, I worship the ground he walks on.

“He exemplifies what I consider to be the greatest attributes of a Scientologist – he is honest, hardworking, can be trusted and exchanges back into his community, (it’s) not just take take, which is what a lot of people in his business seem to be primarily motivated by.

“He is my idol and I’m very proud of he and Katie.

“I look forward to any opportunity to catch up with them.”

Ceberano is about to embark on a national tour, which is sold out. More dates will be announced soon.

[SOURCE]
Comments are off
Published on In
General

Tom Cruise back in Melbourne after month away from family

TOM Cruise has arrived back in Melbourne for an emotional reunion with wife Katie Holmes and daughter Suri.

Cruise, who has been away from his young family for over a month, landed at Essendon airport in a private jet at 2pm and headed straight for the Docklands studios where Holmes is filming Don’t Be Afraid of the Dark.

It was clear Cruise, who flew out of Australia on July 7, had deeply missed his wife and young daughter, spending time with them in their trailer before heading out to enjoy the sunshine.

The famous husband and wife kept the reunion celebrations low-key, taking Suri for a trip to Flagstaff Gardens in the afternoon.

Cruise played with Suri in the sunshine while Holmes watched.

The family turned heads as they played in the gardens and seemed unfussed about mingling with onlookers.

The trio have already visited many major attractions in Australia.

Tom Cruise’s futuristic shower from the film Minority Report is up for auction.

The item is just one of the many parts of Hollywood history going up for auction after LA-based 20th Century Props, which offers a massive inventory of items for use in film and television productions, went bust.

Owner Harvey Schwartz said he ran out of money three months ago and had no choice but to auction off the items.

Also among the inventory is the rattan sofa from The Golden Girls and a chair Claudette Colbert sat on in the 1934 version of Cleopatra.

[Source]
Comments are off
Published on In
General

Tom made it to number 30 on LoHud’s list of 50 greatest actors. You can see their whole list HERE.

DISCUSS at the forum! 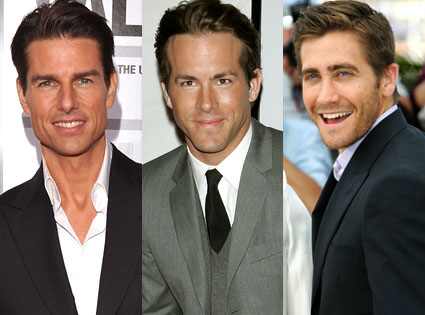 The stars were shining at Coldplay‘s Saturday-night concert at the Home Depot Center in Carson, Calif.