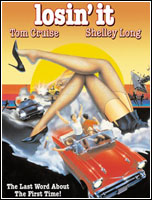 Set in 1965, four rowdy teenage guys travel to Tijuana, Mexico for a night of partying when they are joined by a heartbroken housewife who is in town seeking a quick divorce.

Dave: I heard about this guy who got some spanish flies for his girlfriend, because she wasn’t putting out. He gave her one and stopped at a liquor store or something, and when he came out guess what he found?
Woody: She was dead on top of the gearshift.
Dave: You know the same guy!
Woody: No, the same story.