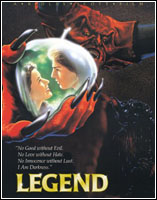 A young man must stop the Lord of Darkness from both destroying daylight and marrying the woman he loves.

Revealing mistakes: When Princess Lily releases her bird at the beginning of the movie, it just falls over on the grass.

Crew or equipment visible: When Oona flies away from Gump towards the end, a black rod (part of the fx equipment) swishes above Gump’s head briefly in the top right hand side of the frame.

Audio/visual unsynchronized: Oona’s opening scenes in the cave (when she’s first shown as a human) are out of sync with her voice.

Continuity: Lily can clearly be seen as Jack prepares to jump back in the lake to retrieve the ring at the end of the “director’s cut” (the correct end take without Lily can be seen in the concluding moments of the U.S. version).

Revealing mistakes: One of the unicorns has a brand at the top of its left hindquarters that is clearly visible in some scenes. It is a “C” from the ranch where the horses were gotten in Spain.

Revealing mistakes: When Lily first sees the unicorns and they start running, you can the horns wobbling on those closest to the camera.

Continuity: In the US version Jack’s shield jumps from being in his hands to hanging from a tree as he decapitates the swamp monster before entering the giant tree. (In the Director’s cut, the removed scene explaining why the shield was moved is restored).

Revealing mistakes: The fishing line holding the tiny light bulb which is meant to be Oona is visible when she circles in front of the bonfire around Jack in her introductory scene

Continuity: The imp statue on the table comes to life twice after Lilly passes the table.

Crew or equipment visible: Towards the end of the director’s cut, where Lily places her ring onto Jack’s finger, you can clearly see the camera’s lens in the ring’s silver reflection.

Princess Lily: Are you afraid to kiss me, Jack?
Jack: I’m afraid you’ll break my heart.
Princess Lily: Then sill your heart, For you are Dear to me.

Jack: How do you know my name?
[cranes head away in annoyance from Oona, who is buzzing around his head] Jack: Stop it! Go away!
Honeythorn Gump: I know everything, Jack. Yet I do not understand what has happened today. Suppose you tell me, Jack? You know these woods as well as any elf. Did you not see something odd today, any strange spirits? Did nothing untoward happen?
Jack: I took Lily to see the unicorn…
Honeythorn Gump: [In outrage] You did WHAT?
[the other elves chatter noisily] Honeythorn Gump: SILENCE!
[They hush]

The sound of the unicorns at play is actually a recording of humpback whales.

The voice of Gump (David Bennent) was re-dubbed by Alice Playten (Blix). For the German version, the voice of Blix (Playton) was dubbed by Bennent (Gump), who also voiced himself.

Filming stopped when the “007” soundstage burned to the ground. The remainder of the film was shot on hastily constructed sets.

The “icicles” in the treasure cavern were made out of several hundred pounds of paraffin wax.

When it came time to assemble the full director’s cut, the original session masters for the Jerry Goldsmith score could not be located. However, Mike Ross-Trevor of Hit Factory Studios in London had kept a two-track digital copy, mixed down from eight-track session masters, which he knew “would be worth preserving.” Most of these tapes contained complete takes, which had to be re-edited from scratch to match the cues in the recut print.

Ridley Scott drew most of his inspiration for “Legend” from the 1946 version of Beauty and the Beast, as well as such Disney animated classics as Snow White and the Seven Dwarfs, Fantasia and Bambi.

The director’s cut reveals an alternative ending where Jack remains in the forest and Lily goes home alone with plans to see him again soon.

The face of goblin Blix (played by Alice Playten) was designed after that of Keith Richards of The Rolling Stones. According to Playten, she thought up the idea, which was supported by director Ridley Scott. He then had Rob Bottin (special make-up effects) implement the concept.

Ridley Scott admits that comments made by some pot-smoking attendees at a screening got the director second-guessing himself, and influenced him to cut the film from 150 minutes to 98.

Johnny Depp, Robert Downey Jr. and Jim Carrey were all considered for the role of Jack.