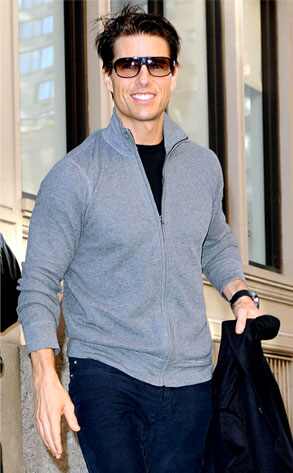 Tom Cruise may have a Golden Globe nomination for Tropic Thunder, but, according to daughter Suri, his performance as Santa Claus needs some work.

“I’m always Santa,” the mega-star said about the Cruise family Christmas proceedings during a press conference for Valkyrie, which hits theaters Dec. 25. “The teenagers know it’s me, but I was surprised at Suri last year. Kate made the Santa outfit and when I came out, I did my best Santa impression. She looked at me and said, ‘No, dada.’ This year, I’m going to do a little better. I’m workin’ on it.”

“We got to shoot in Berlin at the locations where these people wereâ€”and where they diedâ€”which was very powerful,” he said.

The role tapped into a storyline that the Top Gunner has been thinking about since childhood.

“I grew up playing with the neighborhood kids in the yard wanting to kill Nazis, wanting to kill Hitler,” Cruise explained. “As a child you’d think, ‘Why didn’t someone just shoot him?’ This is an important story, because I didn’t know it. It’s important to know, of course, that it’s not everyone, it’s not everybody who felt that way and fell into that Nazi ideology. That, to me, was surprising.”

“When I make a movie, it’s about us,” he said later. “It’s not about me. It’s about the journey we all take together…I grew up wanting to travel the world and I wanted an adventurous life.

“Sometimes I get a little more adventure than I had ever bargained for.”