If you were one of the lucky filmgoers who saw Tropic Thunder on the big screen back in 2008, you left theaters with one image: Tom Cruise, almost unrecognizable, shaking his ass to Ludacris’s “Get Back” during the end credits.

Known mostly for taking dramatic parts at the time, the world was surprised to see Cruise don prosthetics and go full-send into spoofdom to become Les Grossman, the evil studio executive pulling the strings behind Tropic Thunder’s film-within-a-film. Now, in a new interview for Esquire’s “Explain This” video series Ben Stiller—who directed and starred in Tropic Thunder—opened up about Cruise’s antics as Grossman. “Tom Cruise had the idea to play Les Grossman in the movie,” Stiller says. “That part did not exist. He said, ‘Well, there’s no studio executive and that would be really fun to be that guy. And he had this whole idea of what the guy should look like. It was his idea to dance. And I remember when we did a makeup test, someone handed him a Diet Coke and then he just started moving.”

Stiller’s story matches what Cruise told told BBC Radio 1 back in 2017. “I read the script, and he had all of the characters, but the studio wasn’t there,” he said. “There was a structural compression missing down on those characters, you know, that keeps the pressure on these guys that really drives the story. I was like, ‘You need the studio.'”

We’re still waiting for an update on the reported Les Grossman solo movie, but the image of Tom Cruise tripping out on Diet Coke will tide us over for now. You can watch Stiller’s full “Explain This” interview above. Below? We left a little something for you to relive.

Talk about being double-booked: Tom Cruise has a big night on Jan. 11, as he’s nominated for Best Supporting Actor at the Golden Globes for his bit part in Tropic Thunder, but meanwhile, his wife and almost constant companion Katie Holmes has her last performance of All My Sons on Broadway that same night.

What’s a TomKat couple to do?

Katieâ€™s decided to stay and her do last show,â€ Ina Treciokas, Katie’s rep tells FOX411. â€œShe wonâ€™t be going with Tom to the Globes. The cast of All My Sons has been like a family and they want to end it together.â€

So while Tom is flashing that big grin on the red carpet, Katie will be taking her final Broadway bow, at least for now. That leaves the question of who Tom will bring as a date. Maybe his mom, or a friend… but our vote is for Suri! 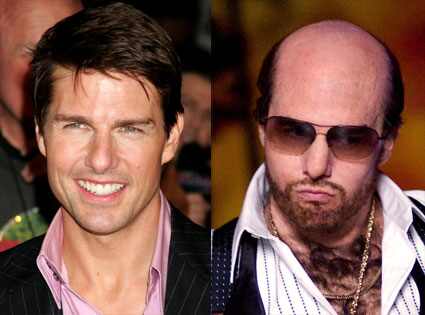 Tom Cruise: More of Les Grossman in the Works!

Forget Tom Cruise’s reaction to his Golden Globe nomination for his work in Tropic Thunder for a moment. Mr. Cruise can’t help but think of how his foulmouthed alter ego, Les Grossman, would react to the news.

And it sounds like this isn’t the last we’ve heard from the balding, hairy-chested studio boss. Read on for all the Grossman details…

“Iâ€™ve talked about doing different videos with the character,” Cruise said. “Iâ€™ve started working with Ben [Stiller] on it, and weâ€™ve kind of talked about different things to do. We were gonna do some in our free time, but we havenâ€™t found the free timeâ€¦yet.”

He doesn’t rule out a full-length feature film centered on Grossman: “Heâ€™s a fun character,” said Cruise, who will next be seen in the real-life WWII thriller Valkyrie. “I gotta talk to Ben, but there could be more to do with that guy.” 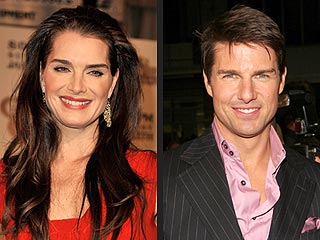 The Golden Globe nominations are in â€“ and many of the new nominees are expressing their excitement, gratitude and surprise.
(…)
Brooke Shields, who rose early to help announce the nominations, was thrilled for friend Tom Cruise, who nabbed a Best Supporting Actor in a Comedy or Musical nod for his nearly-unrecognizable turn as a fat, balding movie executive in Tropic Thunder. “I’m so glad for him!” Shields told PEOPLE. “I think it’s ironic, all the work that he does [and] that’s what he gets nominated for. I think he’s done tremendous work so I think he’s probably chuckling about it too.”

Tom has just been nominated in the Best Supporting Actor category in the Golden Globes Awards for his role in Tropic Thunder!

Congratulations from all of us here at TCF on the nod Tom!

War huh? What is it good for? Well, judging by the reaction to the UK premiere of Tropic Thunder in Londonâ€™s far-from-balmy Leicester Square, itâ€™s at least good for a top-quality giggle.

The three stars of Ben Stillerâ€™s action comedy, Robert Downey Jr, Jack Black and Stiller himself, were out in force amid a jungle of camouflage-clad models, friends and well-wishers to celebrate the movieâ€™s launch.
For people yet to watch the film, the main talking point is Downey Jrâ€™s portrayal of Method-espousing actor Kirk Lazarus. But for those whoâ€™ve been lucky enough to see the hilarious flick, all tongues were wagging about Tom Cruiseâ€™s slightly disconcerting cameo.

â€œHeâ€™s awesome, heâ€™s hilarious and Iâ€™d work with him again in a second,â€ says Stiller of his A-lister buddy. â€œHeâ€™s been supportive of the movie from the beginning and it was great to have him in it.â€

Does this foray into comedy mean that Stiller and Cruiseâ€™s long-mooted plans to make the Hardy Boys update, The Hardy Men, are coming to fruition?
â€œYou know what we had a lot of fun working together so I hope so. Weâ€™ve got to get together on a script first but itâ€™s definitely something we want to do.â€

Stillerâ€™s latest directorial effort is without a doubt his most ambitious effort yet, how did he cope with all the big bangs?

â€œWhenever you make a movie you wonder if youâ€™re ever going to be able to get out of it but this was great,â€ he says. â€œIâ€™ve been involved with lots of movies where you get to blow stuff up and luckily the explosions went well on this movie. The camera was rolling when it was supposed to be, so everything was cool.â€
Jack Black, dapperly dressed in a weather-themed suit (â€œThis jacket was my design, I said I wanted something with lightning and thunder to honour the movie but it looks a little bit like bird shit.â€), is set to star next in Harold Ramisâ€™ pre-historical comedy Year One (â€œIt’s going to be very good. Itâ€™s a comedyâ€¦ set in biblical times,â€ says Black helpfully) but heâ€™s not ruling out a sequel to his latest release.

â€œI had a great time making this movie,â€ he says. â€œI hope thereâ€™s a Tropic Thunder 2; I think we could call it Arctic Lightning.â€

Tropic Thunder is released in the UK on Friday.

Tom Cruise seems to have regained his cool in Tropic Thunder (* * * out of four).
Cruise’s paunchy studio exec is easily the funniest role of his fairly straight-faced career. Whether barking outlandish orders or gyrating ridiculously, Cruise’s bald-pated, hairy-knuckled movie mogul is outrageously amusing. His boyishly eager businessman from Risky Business has grown into a cynical jerk of a studio chief â€” but he has updated his dance moves. Though it can’t be an easy feat to go up against such comedic powerhouses as Robert Downey Jr., Jack Black or Ben Stiller, Cruise proves a formidable co-conspirator in this send-up of Hollywood egos.

This action film parody is surely going to divide people. Not only is it unabashedly politically incorrect, but it is almost a textbook definition of an uneven comedy. There are some wildly funny scenes, a few leaden ones and others that are scattershot, with humorous satire undercut by over-the-top grisliness. Still, when it’s funny, it’s really funny.

Stiller flexes his muscles as action star Tugg Speedman, who routinely saves the world as the star of the Scorcher series. Black plays Jeff Portnoy, who is tired of being celebrated for his girth and prodigious flatulence and wants to try something serious. But serious drama is all Kirk Lazarus, the five-time Oscar winner from Australia, has ever known. Downey plays the blond, blue-eyed Lazarus as a black man for most of the movie.

These men come together in Southeast Asia to film a Vietnam War movie under the direction of a first-time filmmaker (Steve Coogan), a trigger-happy explosions expert (Danny McBride) and an enigmatic military consultant (Nick Nolte). But things go horribly wrong. (USAToday) 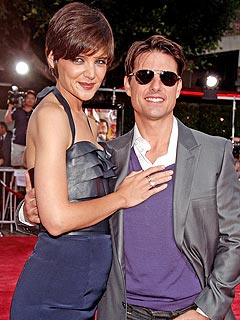 Tom Cruise may only have a small part in Tropic Thunder, but he ruled the red carpet for the Los Angeles premiere.

Cruise, who donned a fat suit to play studio exec Les Grossman in the film, stayed close to wife Katie Holmes Monday night, greeting fans and only letting go of her hand to pose for a quick cast shot.

Other than the fans, fellow star were happy to see the couple â€“ PEOPLE caught Matthew McConaughey, Ben Stiller and Jack Black all giving big hugs to Cruise. And costar Jay Baruchel told PEOPLE that Cruise is “the funniest guy in the world.”

Robert Downey Jr., who played an actor posing as an African-American in the film, said he just got out of character after wrapping up the DVD commentary. “The actor, in the movie, said that he never dropped character until the DVD commentary, and in keeping with being a ‘method-idiot,’ I’m never going to do it again,” he said.

Stiller, who wrote, produced and acted in the movie, arrived with his wife Christine Taylor, who also had a cameo (She previously appeared in Stiller’s Zoolander and Dodgeball.) .

“It was so much fun for us,” Taylor said, adding of the third time she costarred with her husband, “I’ve gotten used to [it] through the years.”

Later, Stiller told PEOPLE the secret to their eight-year marriage is “that it’s all about mutual respect, and really being there for that other person. You can’t take anything for granted.”

bauergriffinonline says Tom & Katie praticed patience while posing, since their photographer’s memory card ran out of space just as the supercouple strolled up:
“Instead of passing on by, Tom and Katie patiently waited for her to swap out cards, smiling and playfully jesting about her professionalism. Then, with the new card in and their star smiles still sticking around, it all played out perfectly. Thanks for your patience, Tom & Katie!”