Hello everyone! This is a bit of old news that I forgot to post. But the movies release dates got pushed due to the Coronavirus Pandemic. Here are the new release dates:

The filming for Mission: Impossible 7 which was due to start in Italy back in March was delayed and there are reports that they won’t be shooting in Italy after all. More news to come.

A new teaser for Top Gun: Maverick has been released today during the Superbowl, watch it below:

After more than thirty years of service as one of the Navy’s top aviators, Pete “Maverick” Mitchell (Tom Cruise) is where he belongs, pushing the envelope as a courageous test pilot and dodging the advancement in rank that would ground him. When he finds himself training a detachment of Top Gun graduates for a specialized mission the likes of which no living pilot has ever seen, Maverick encounters Lt. Bradley Bradshaw (Miles Teller), call sign: “Rooster,” the son of Maverick’s late friend and Radar Intercept Officer Lt. Nick Bradshaw, aka “Goose.” Facing an uncertain future and confronting the ghosts of his past, Maverick is drawn into a confrontation with his own deepest fears, culminating in a mission that demands the ultimate sacrifice from those who will be chosen to fly it. 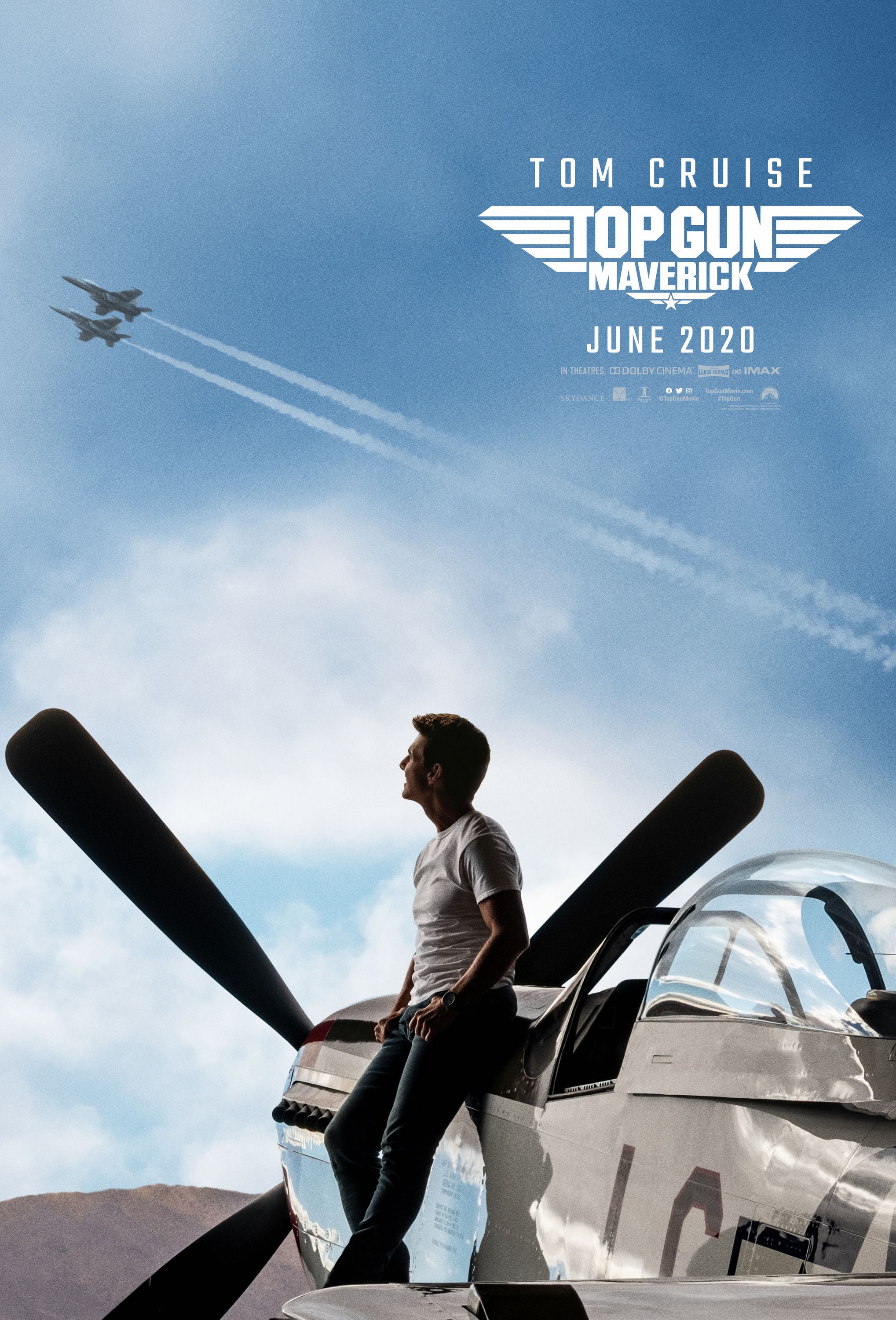 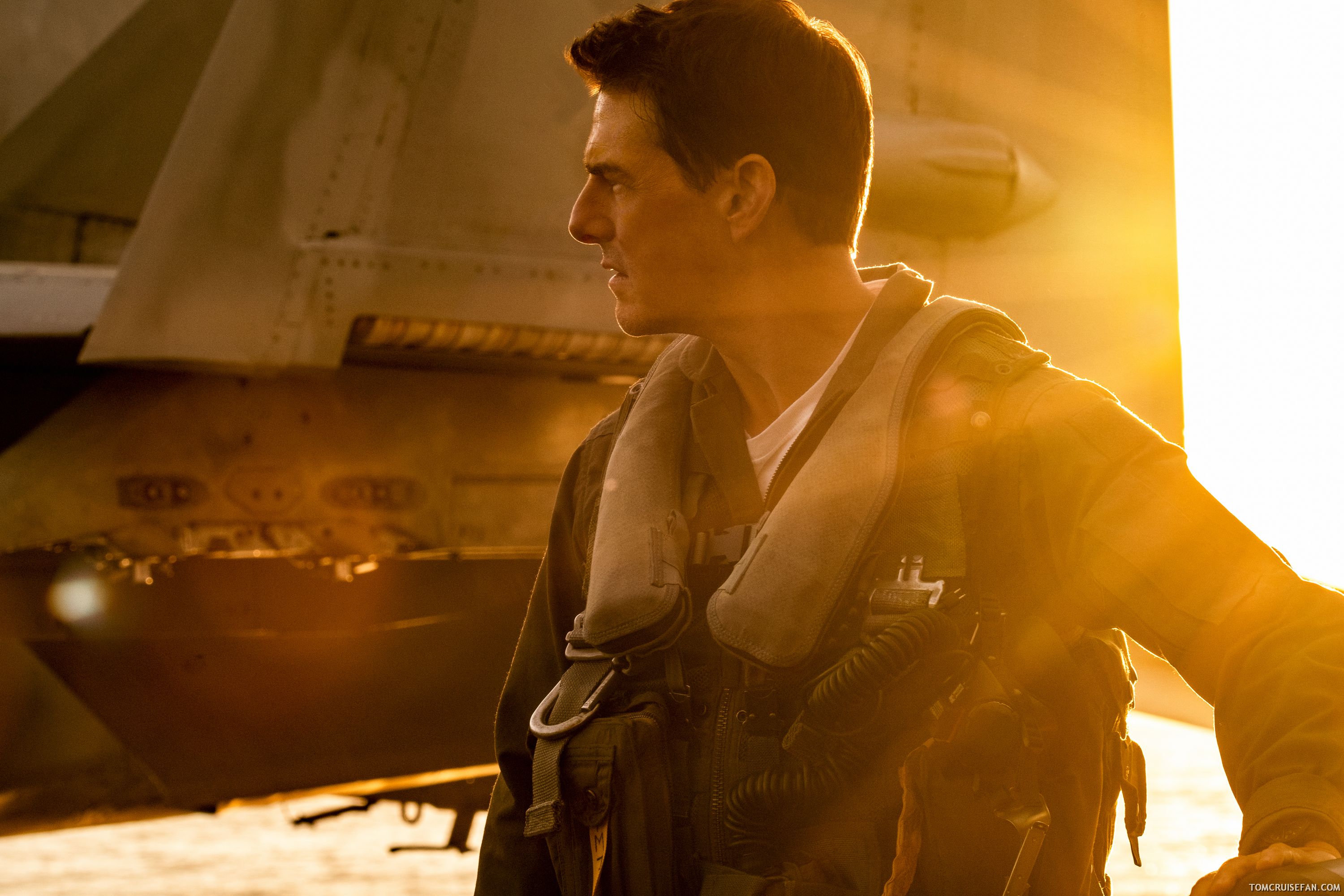 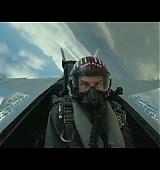 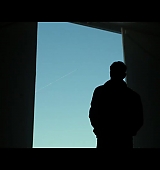 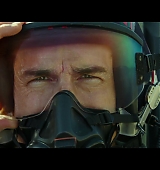 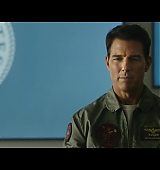 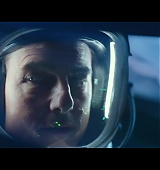 Tom Cruise surprised everyone today at Comic-Con International in San Diego when he showed up to present the trailer for Top Gun: Maverick. Here are photos from the presentation and videos from various twitter sources of him presenting the video and talking about the movie. 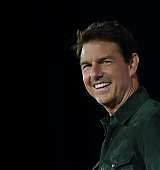 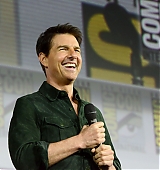 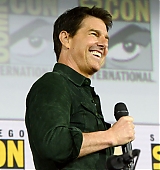 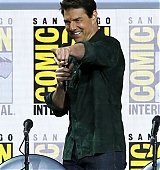 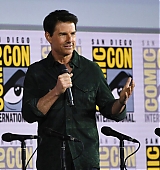 Tom Cruise on the #TopGun sequel, “Everything you see in this movie is real.” Watch the trailer here: https://t.co/gNrYeTGyiR pic.twitter.com/NraECdEMqB

In a the first surprise of #SDCC50 Tom Cruise shocks the Hall H crowd and premieres the first trailer of #TopGunMaverick pic.twitter.com/EUc5Nsuxkb

The first trailer and poster for Top Gun: Maverick have been released today at Comic-Con International, by none other than Tom Cruise himself (pictures from him in the next post). Watch the trailer and view the poster below and screencaptures from the trailer: 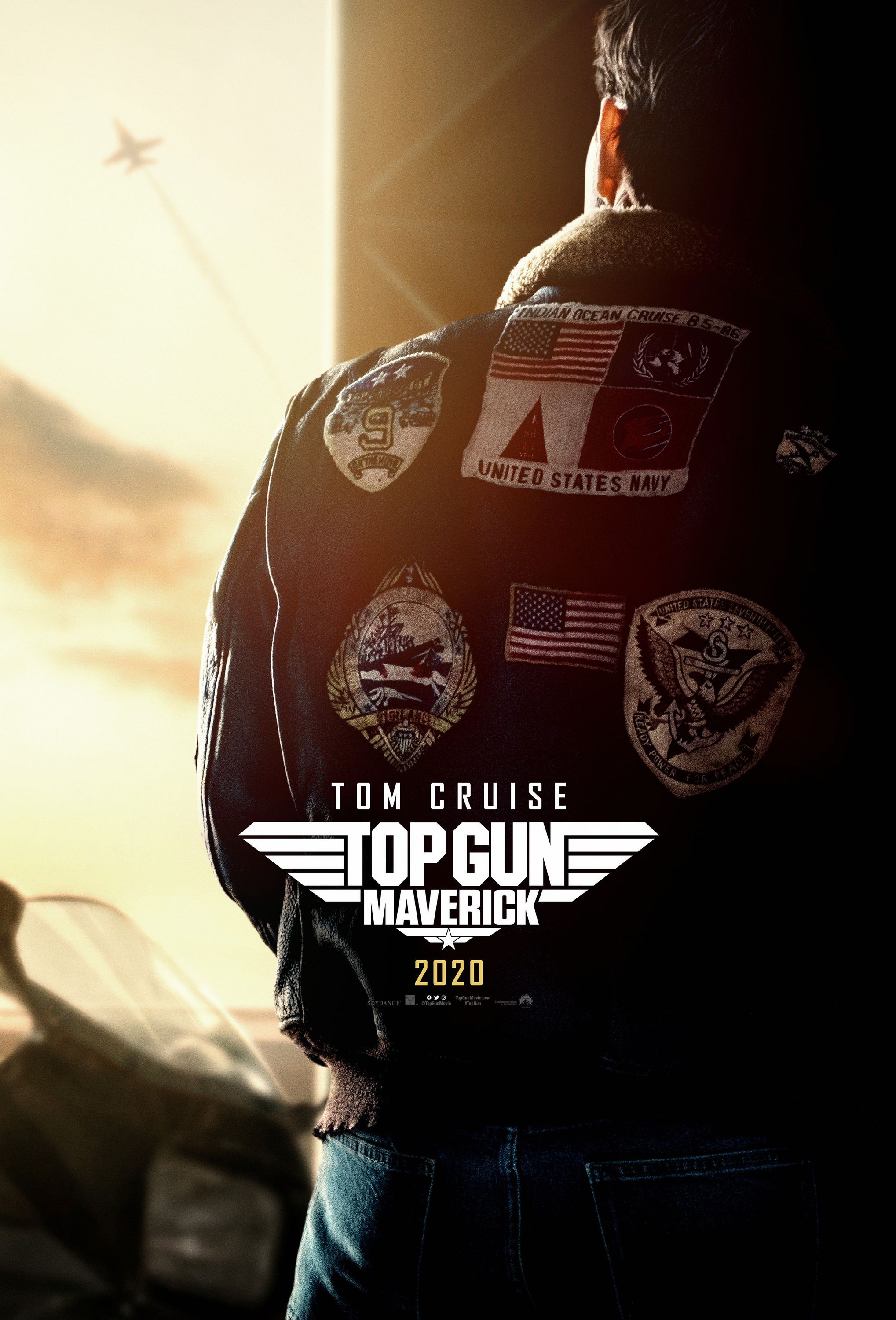 Screen Captures from the trailer: 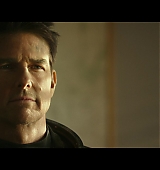 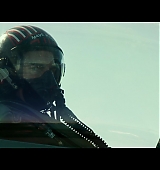 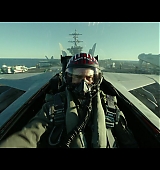 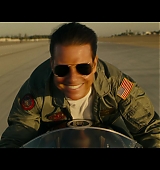 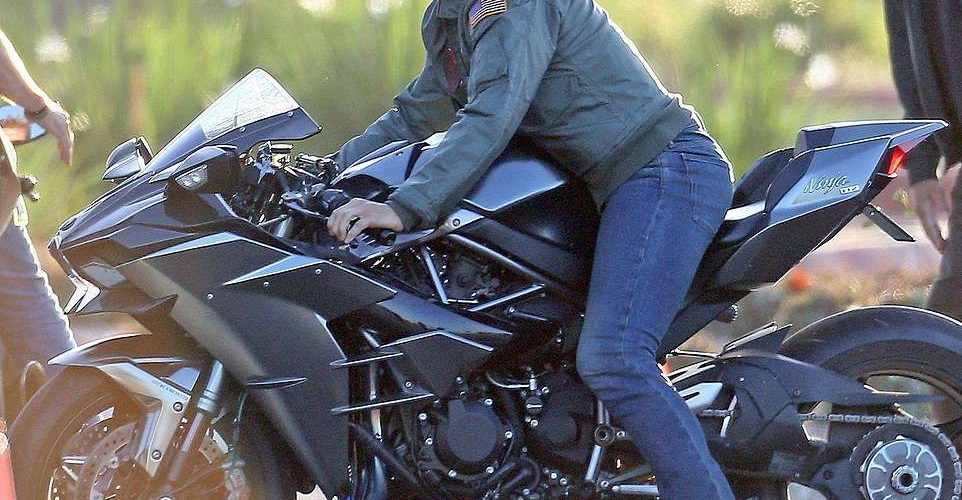 Here are some pictures from Tom Cruise on the set of Top Gun: Maverick. Click thumbs to view more. Also, some tweets below: 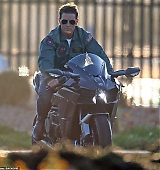 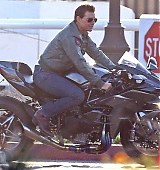 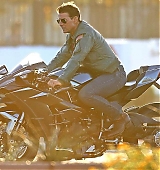 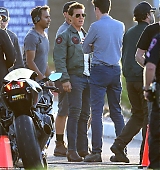 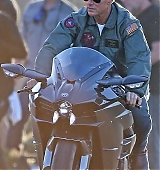 Tom Cruise filming TOP GUN 2 and looking like he stepped into a time machine. pic.twitter.com/YkdDpak9Ja

I feel the need to see more images of Tom Cruise back on the bike rocking the bomber jacket and aviator shades in #TopGunMaverick pic.twitter.com/x4r5qaojtT

None of the actors’ roles has been revealed, aside from a vague tease that Wang’s character will play one of two female pilots, with the other being the already announced Monica Barbara.

Top Gun: Maverick is said to be set in a world of drone technology and fifth generation fighters along with exploring the end of the era of dogfighting.

Joseph Kosinski, who previously directed Cruise in Oblivion, will helm the sequel, with Peter Craig, Justin Marks and Eric Warren Singer penning the script. Although the title Top Gun: Maverick floated around briefly, the film is currently without an official title.

A follow-up to Tony Scott’s 1986 hit has been in the works for quite some time, with Tom Cruise interested in reprising his role as United States Naval Aviator Lieutenant Pete “Maverick” Mitchell. Producer Jerry Bruckheimer previously outlined that the film will deal with the rise of unmanned drones and pilots becoming a thing of the past.

The original Top Gun was directed by Tony Scott and also starred Kelly McGillis, Anthony Edwards and Tom Skerritt. The film won an Academy Award for Best Original Song for “Take My Breath Away” performed by Berlin. In 2015, the United States Library of Congress selected the film for preservation in the National Film Registry, finding it “culturally, historically, or aesthetically significant.” 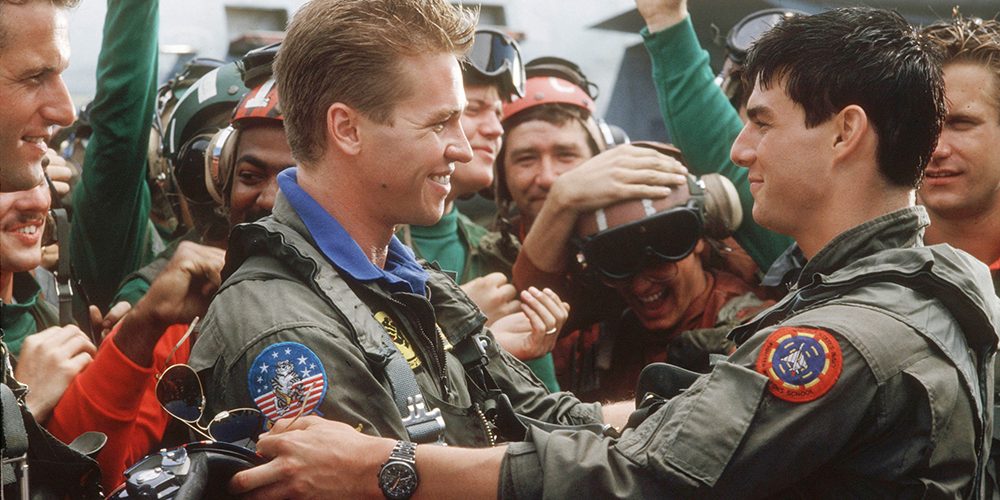 Earlier today, Tom Cruise tweeted an image from Top Gun to announce the start of production for Top Gun: Maverick. Check it out below:

We have a release date for Top Gun: Maverick!

Variety reported on May 24 that Joseph Kosinski — who directed Cruise in “Oblivion” — was the frontrunner to direct “Top Gun 2” for Paramount and Skydance Pictures.

Skydance CEO David Ellison and Jerry Bruckheimer, who produced the 1986 original, will produce with Cruise. This latest project will be set in a world of drone technology and fifth generation fighters along with exploring the end of the era of dogfighting.

Cruise said recently the title would be “Top Gun: Maverick” although Paramount listed the title Friday only as “Top Gun.” “Maverick” was Cruise’s character’s nickname in the film in which he played Naval aviator Lt. Pete Mitchell.

The movie is the first title to land on the July 12, 2019, release date. It will open a week after Sony’s “Spider-Man: Homecoming” sequel.

The original film, directed by the late Tony Scott and set at the Navy’s Fighter Weapons School at Miramar Naval Air Station in San Diego, was a massive hit with more than $350 million in worldwide grosses. Val Kilmer, Kelly McGillis, Tom Skeritt and Anthony Edwards also starred in the original, in which the protagonists flew the F14A Tomcat. Kilmer has said he’d like to return for the sequel in the role of Tom “Iceman” Kazanski.

Cruise had been working with Tony Scott on the sequel before the director’s demise in 2012. In 2015, the United States Library of Congress selected “Top Gun” for preservation in the National Film Registry as one of the 25 films named annually that are “culturally, historically or aesthetically” significant.

Cruise met with potential directors for the “Top Gun” sequel earlier this year prior to and while filming “Mission: Impossible 6” in London. “Oblivion” was a success for Cruise and Kosinski, bringing in $286 million worldwide.